A great long read here about what’s going on between Obama and Republicans in Congress during fiscal cliff negotiations. Here’s my summary:

Obama slammed his offer on the table and he wasn’t shy about it: $1.6trln of tax increases and $400bn of entitlement cuts. Considering that during debt ceiling talks in the summer of 2011 he almost had to beg Boehner for $800bn of tax increases and still didn’t get it, it’s a rather bold but totally justified move. The interesting part here, however, is the way Republicans approach that $400bn cuts in entitlements – which I have to remind you is what they badly wanted: they insist on Obama giving them details on specific programs to be cut. This is hilarious! The dialogue would go somewhat like this:

Republicans (badly wanting those cuts) to Obama: “So, show us what you would cut.”

Obama (incredulously): “Guys, you wanted it – you pick what to cut.”

Republicans: “No, you first”

Obama: “Wtf, you guys? Have you never bought a car before? Why should I negotiate with myself? You want it – you show me a bid.”

The reason that Republicans are unable to come up with specifics about what programs they want to cut is that those programs directly benefit middle class taxpayers: they include employer sponsored health insurance, 401(K) and pension plans, earned income tax credit and mortgage interest deduction. That’s why they want Obama to make the first move. And these are the guys who wanted to show us all how to run a country?!

Btw, here’s the CBO chart of the contributing factors for  US national debt just to give you a perspective: 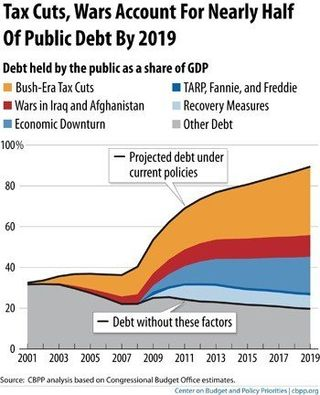